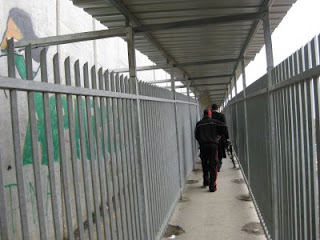 I live in Bethlehem, which is part of Palestine, and work in Jerusalem, in Israel. Sometimes, I go to work (which is only a few miles from home) by taking a group taxi to the checkpoint, walking through the checkpoint, and then taking a bus to the office. My experiences going through the “checkpoint” between Palestine and Israel have been some of the most eye-opening and frustrating parts of my move to Bethlehem.
Last week, I got on to my group taxi, confident about crossing over because the day before had been no problem. The process should be simple: go to the checkpoint, pass through, get on bus, get to work. I thought it would take ten or fifteen minutes, and I would probably arrive about five minutes late to work (still working on the timing).

When I got to the checkpoint, I heard a lot of noise from the area of the security checks. This is never a good sign. It means that things are going slowly, there is backup, and men are upset to be late to their jobs in Jerusalem. I got in line, knowing it would take a while, and proceeded to wait patiently for a half an hour for about 50 people ahead of me to get through. There was only one open line, and any time someone had trouble everyone had to wait.

I was about ten people from the front of the line and talked to a coworker to tell her I’d be late, but expected to be in shortly. About then, with a lot of yelling, pushing, and frenzy around me, I learned that the line we had all been waiting in would be shut down and everyone would have to go through the one which had been closed. It was a shame for those of us at the front of the line, because whoever was closest to the other line would, of course, get there first. Feeling frustrated, I got in line again, at the back (because I’m an American and that is what we are taught is fair from a very very young age). By this time the pre-9am rush had started and the line was growing quickly. Anxiety grew.

I joined an English speaker who I’d met the previous week while trying to get through the checkpoint. A guard (a young Israeli woman) with a big gun walked over our heads, casually taking in the scene. After another half-hour or so, the guy I stood with yelled to her, “Open the other line!”

After a few words in her walkie talkie, she motioned that the first line would once again be opened. People madly rushed to get in the front. My friend and I joined them, but my my pushing skills are decidedly sub-par. We made it into the line, me behind him, and he negotiated with our line mates to get me where he was, closer to the front. People are often gracious to foreigners.

We waited for another ten or twenty minutes, hoping that our line would move. We heard beeping from the other line indicating that it was, excruciatingly slowly, letting people through. Finally, the guard looked down to us and indicated that the line we were in was not going to open. After an hour and a half, too bad, get back in the other line.

My friend told me it would be another hour before we got through, based on where we ended up in line. By this time I was bruised, tired, frustrated beyond words, and very tempted to call it a day and just go home. I looked around and reminded myself that many of these men go through the checkpoint every day to get to work to support their families. I shouldn’t be so selfish.

People cut shamelessly in line, every man for himself. Tensions grew. Fights nearly broke out. I was upset with the behavior of the people in line, but even more was upset as I began to think that the whole thing was intentional. There are so many ways the process could be efficient. But why make it efficient? The goal is to keep people out, not make it easy for them to come in. True or not, it felt increasingly intentional as the guards lazily meandered around watching people get more and more upset.

There was a lot of pushing to finally get into the final part of the line which has metal barriers to funnel people. Once I was in, multiple people ducked under the barrier, jumping the line. One man’s anger boiled over, and he began a passionate speech. “You should be ashamed of yourselves!” was the clear message. “I can do it too, see?” as he climbed up on the barrier and crossed to the gate, right over my head. Although no one got out of line, I think they did look ashamed by the end of it.

Finally, I got through. After security, you show your papers (passport in my case). I was in line behind a woman with two children who looked to be under two. She cried and pleaded with the guard who told her she couldn’t get through, she didn’t have the right papers. The guy next to me said that she was claiming that her husband is dead, and she needed to go to the hospital or something. She was waved aside and I’m not sure if she ever made it through. I hear that most of the time people are given leniency even without proper papers in such cases.

Finally I got on my bus in Jerusalem and made it to work — about 2 and a half hours late.

Although thankful for these experiences which, although not the everyday occurrence do give some insight into the feelings of oppression of the Palestinian people, I am very thankful that I am able to go to work with a coworker most days. We drive to Jerusalem through a much easier checkpoint which caters to Jewish settlers in the West Bank so they are not prone to hassle us much because they assume we also are settlers.

Before I sign off I want to mention that this is one experience I had, and how I felt as it happened. There are multiple sides to every story and I don’t intend to make a statement against anyone in this post. Since I live in Palestine, many of my initial experiences have been seen from a Palestinian perspective. I look forward to sharing as I learn more about Israel as well.

As it is written: “There is no one righteous, not even one…”

Note: The pictures in this post were taken from the web to give you an idea of what it looks like, but are not from the day I was there and were not taken from me. For proper credit, see the links.