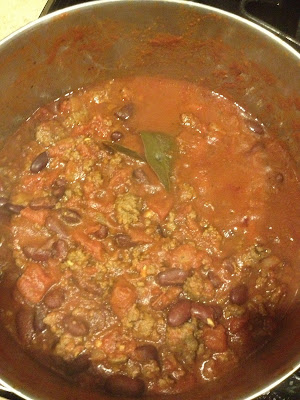 Today I made chili for dinner. It is one of my favorites both to make and to eat, and Jesse and I enjoyed it.

When I make chili these days, however, I can’t help but remember the biggest cooking catastrophe I have ever been responsible for. Actually, it was the biggest I have ever witnessed.

It was back in 2011 when I was visiting England from Palestine/Israel. Kagi and I were dating and I was staying with the Greens. I decided that it would be fun to make dinner for them and Kagi one night. The previous fall I had found cornmeal in England after a lot of searching, so chili and cornbread was my plan. I scoured allrecipies.com for the best chili recipe and found and American one that looked great.

I decided to make a lot of chili, and spent a whole day walking to various shops to gather the necessary ingredients. I went to both English and Asian (Indian or Pakistani) shops to make sure I had all of the meat, beans, veggies, and spices. I remember carrying heavy bags for a mile or so, ready to make the meal.

Back at the house, I set to work. Onion, meat, garlic, tomatoes, beans, and spices in a very big pot. It looked and smelled great.

With everything in, I tasted it to make sure the flavors were right. Immediately my eyes and nose started running. My mouth was on fire, and I realized what had happened. Chili powder in the States is a mild spice mix for making chili and things like it. Chili powder in the UK is made from chilies. The recipe called for 1/4 cup of chili powder, and I had followed it exactly.

At that point, I knew I probably should scrap the whole thing. I am known for my love of spicy food and even I couldn’t eat that.

But after all of the work to get the ingredients I couldn’t bear to throw it away. Maybe I could fix it…

So I started by straining the whole thing. I may have even rinsed it. It was still really spicy. Next, I added quite a few more cans of tomatoes. I added a lot of sugar. I added beans. I added everything I could think of.

Finally, it got to a point that I could kind of eat. By this time, the family was home. Kagi was there, and I didn’t know what to do.

So I served the chili and cornbread.

It was so hot. Honestly, I could barely eat it, and I know I have a very high spice tolerance. The worst part of the whole thing is that I served it to the best sports I know. I don’t know how, but they managed to eat it. I still can’t believe I did that to them.

To me, the funniest part of this situation was Kagi, who had a really awful cold the day this happened. He loved the chili and ate a lot of it. He says he doesn’t remember it being spicy at all! 🙂