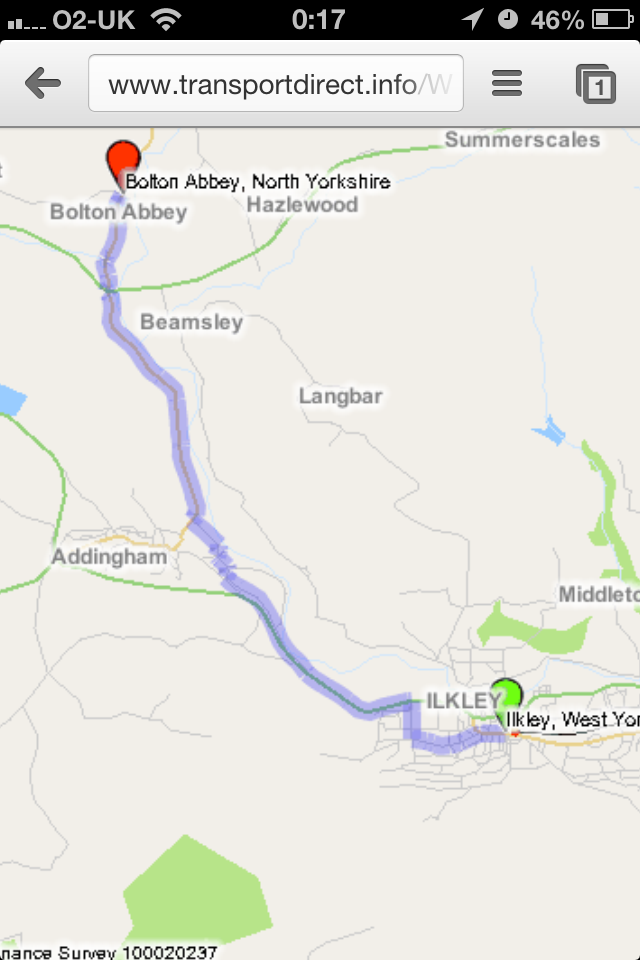 Adventure in the Dales

Kagi and I had a really exciting week last week. There are lots of stories to be told, and although it is no longer lent so I probably won’t be blogging daily, I’ll try to tell them.

First, I’ll tell about the climax of our week. In the autumn, +Kara and Forrest blessed us with a gift of a night at a bed and breakfast where they spent a night while in England. Kagi and I were looking forward to using it for months, but obviously needed to wait until I got back to use it. It worked perfectly to take a few days in the Dales during the university’s Easter break.
Kagi also arranged with Jako and Anneke and their family to visit and coincide with our trip so we could get a day out together. They stayed with us on Sunday evening and then Monday morning we headed out, planning to meet them at Bolton Abby.
We rode our bikes down to the train station about a mile from home and took the train to Ilkley, a beautiful town on the edge of the Dales. From there, we rode our bikes to Bolton Abby.

After our lunch, Kagi and I headed off on our bikes toward the bed and breakfast. Here is the route we took: We continued cycling, and at one point were held up by the traffic: Finally, exhausted but very happy, we arrived at the Tudor House. The owner served us tea with brownies and a dessert bar, and we decided to spend the evening in. We really enjoyed being there!

In the morning, we had an absolutely wonderful breakfast made from local produce which included everything you could imagine. We enjoyed our time eating and then relaxed again before heading on our way.

It was a really nice trip, and it was also nice to get home and rest up:-)!

Today has been very busy, and very good. This is my first moment which hasn’t been very relational and/or active since waking this morning. It’s 10pm and I’m tired but happy and thankful for good food, great friends, and a good-crazy kind of day.

This morning Kagi and I woke up, had our breakfast, and prepared for a day in the city. We walked the 2.5 miles to the Discovery Centre (where Global Cafe is headquartered and Kagi used to live) through freezing wind and stinging snowfall. There, I helped Kagi with his weekly cleaning job. Because both of us were working quickly, we finished in about an hour and booked it down to the City Centre.

In the heart of Bradford, we met with our friend Ben who has been a very good friend to me since I first came here. He was even there the day Kagi and I met. Now Ben lives in Finland, and I am so glad we took the rare opportunity to hang out during his visit to Bradford this week. It was especially fun to hear how God has been answering prayers that we have been praying since meeting almost three years ago, and to share stories with someone whose journey of faith makes Kagi and my last few years look relatively simple. We are so encouraged by Ben and I am reminded what a blessing he has been to me. Although we have never seen him all that often it does seem that Bradford is missing something without him here.

After that meeting, we went back to the Discovery Centre for an amazing Spanish lunch prepared by our friend Juanma’s parents. It was so fun to meet his family and to spend time with international students and other team members. In our multi/inter-cultural lives, Global Cafe provides a community which feels more like home to both of us… sometimes even more than we feel at home in our countries of origin. For me, it is a reminder of my beloved International Friendship Club in Maryland.

Following lunch, Shell, the leader of Global Cafe, took me with her on her trip to Costco! I blogged about strangely missing Costco way back in this post. Finding out there is one near Bradford was very exciting news for me, and I was not disappointed on my trip there today. It was really nice to hang out with Shell, first of all. She shares my love for Jesus and for cultures, and is someone I have really enjoyed getting to know over the past few years. Today I found out that her husband who is also from Southern Africa is a “meatetarian,” like mine. She has offered to help me find ways to feed Kagi without going broke, which (especially after recently instituting a new budget) I am very excited about!

Costco was also much more similar to the Costco in the States than I was expecting. They have most of the same items and kept the prices about the same as they would be in USD but just made them in GBP, which makes everything about 1.6 times more expensive. Compared to importing these items myself or paying the supermarket price for these American staples which are considered luxury items here, the prices were great. I bought things like Kirkland almonds, a big tub of crunchy peanut butter, a big tub of salsa, and Costco bagels. They also have the big bags of Crasins and affordable vanilla which was a thrilling discovery even though I decided to hold off until I have a little more in the budget another time. It was laid-out and looked just like it does in the States.

As we were leaving the store at about 4, I glanced at my iPhone to see a message my dad sent me about the staff meeting I was prepared to join at 5pm via Skype. I had told Shell about it and planned to be home in plenty of time for it. However, while reading my dad’s email I realized that I forgot that the daylight savings time changes earlier in the States than in England. We are only 7 hours ahead instead of the usual 8. While kicking myself for being late, I realized that, not only had I not realized the time change, I also had mis-calculated. 8am is 8 hours before 4pm, not 5pm. I was both sorry and embarrassed about this clumsy mistake. I sent an email as we headed home.

To keep this story from going on forever, I’ll just say that Kagi and I ultimately got home at about 5:30 after traffic and a few other delays. We unexpectedly had a few of the guys from church come home with us, which was a lovely surprise. I figured out that I had totally missed my call and set to hanging out with them, preparing dinner, and having some great conversations.

There is more, but I guess for today I’ll leave it at that!

Today I spent most of the afternoon in a “charity shop” which one of the other young ladies from my home group manages. It was a nice afternoon in the fairly small, one-room shop.

I think this must be what Goodwill stores were like originally, but I’m not sure. Thrift stores in the States are very different than charity shops in the UK. This one is owned by a network of local churches who give out the proceeds from the shop as well as additional funds they steward to local charities. They provide a service to the low-income residents of the neighboring community by offering low cost clothing and household items.

The shop has one part-time manager and is otherwise run by volunteers. Most of them are ladies who volunteer once or several times a week.

This is definitely a part of the British culture. There are small charity shops all over. I find it interesting. 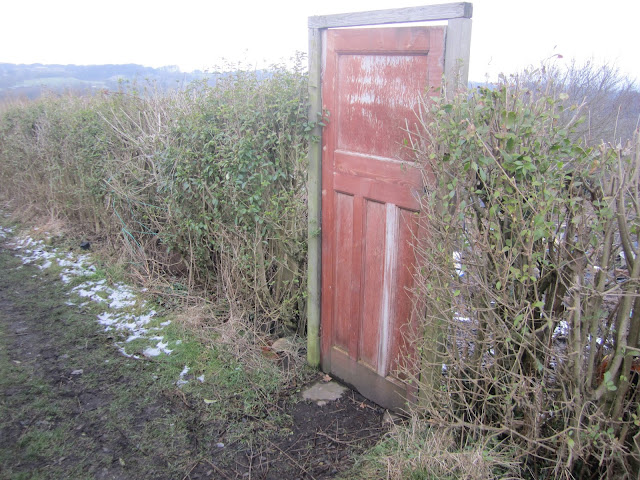 Today I took a walk in the late afternoon through some of my favorite places in this area. Here are some pictures from my journey. 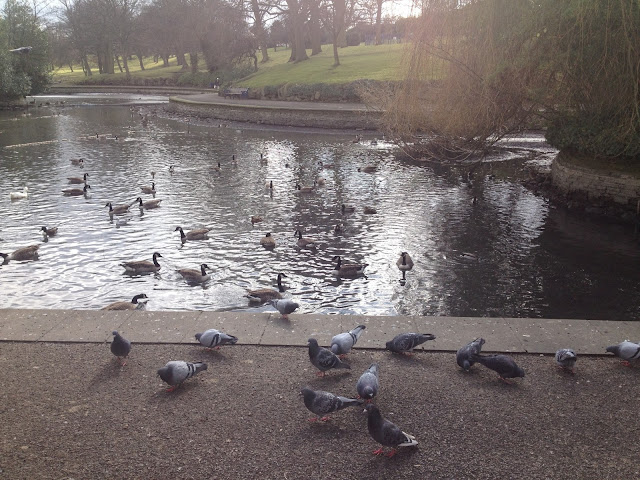 I must have been weighed down as I considered what to write about earlier and decided my walk up the hill would be a worth-while blog. I actually wrote most of another blog but decided it needed too much work to iron out before publishing tonight. So we’re back to the original idea…

Since Kagi and I don’t have a car we do our main grocery shopping online and have it delivered. We did our big shop last week. Today I needed to get a few things we’ve run low on, particularly because I’m leading Global Cafe’s St. Patrick’s Day celebration tomorrow night.

While at the store there was an attempted robbery. It actually was kind of funny, a guy walked in and filled a big bag full of groceries. The man behind the counter had his eye on him via the security cameras, and while I was at the counter the guy walked out. The grocer ran after him and brought the overflowing bag back in. Overall, and interesting thing to watch. It kind of seemed like it happens all the time.

So I walked down the hill (it’s only a 1.33 mile round-trip which makes the fact that I decided to document my struggle rather comical) and visited the local grocery shop. I got what I needed and then knelt on the store floor to pack it all into the backpack which I had (thankfully) thought ahead enough to bring with me. Then I began my journey back up hill:

Life without a car is certainly different!

Yesterday a man who I met during my first trip to Bradford came up to me at church. He is a very gentle man who spent a little time with the team I was with in 2010. I was one of three women who ended up spending time praying for him one day — that God would break into his situation and free him from oppression which was weighing him down. Particularly, he had been unable to play musical instruments, something which had been a great joy all his life. It seemed difficulty in his spirit prohibited him from expressing himself through his musical gift.

He told Kagi and me that he still remembers me because of that time of prayer. God began working toward restoration in his life at that time. He has been able to play music since and spoke of great intimacy in his walk with God. He thanked me for being a part of it.

To be honest, my memory of that day is vague. I was not the leader in that situation and I am very aware that whatever part I played was very small as God brought healing in his life.

What a blessing, though, to hear that from him. How wonderful to know that over two years ago God began healing which still growing and going deeper in him, which I got to be a witness to. What a beautiful thing that in the family of God we can have moments of joyful remembrance and praise for what He has done in our midst!